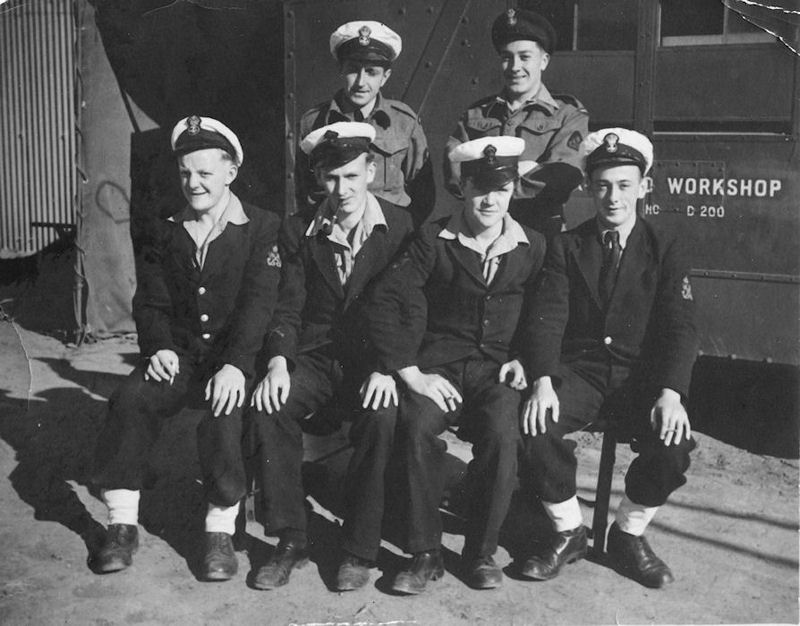 The Petty Officers of the Mobile Repair (MR) 1 Radio workshop with one of their mobile workshop vehicles at R.N.A.S Nowra in 1945. 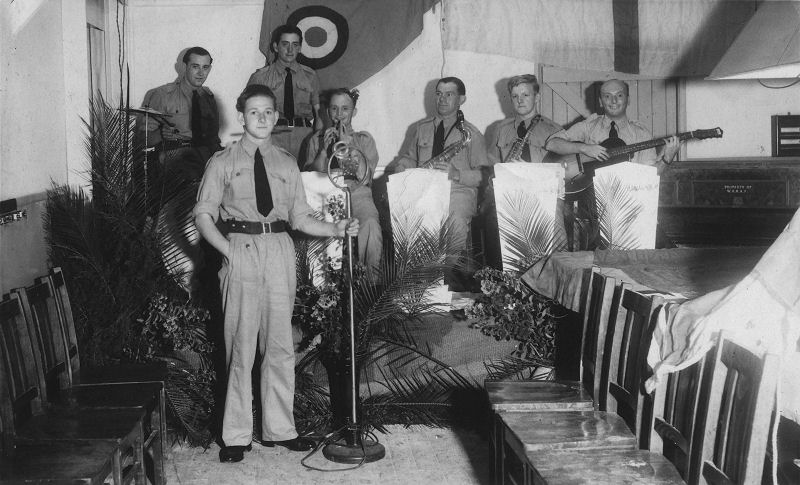 Petty Officer Radio Mechanic Gordon Theaker (second from right) and the other members of the Naval Dance Band.

Gordon served with the radio section of Mobile Repair Unit No.1 (MR 1) at R.N.A.S. Nowra, he was a member of the local RN dance band, and possibly the last member of MONAB I to leave Nowra after it paid off.

I joined the Navy in June 1943 at H.M.Sl ROYAL ARTHUR and on the 9th July went down to Devonport to undertake a Radio Mechanic's course. After various drafts I arrived at HMS NIGHTJAR near Warrington, servicing A.S.R. equipment on a squadron. September 1944 saw me transferred to RAF Ludham (HMS FLYCATCHER) to join MONAB I. Our main occupation was trying to assemble portable hangers in 7 hours, which we were unable to do in 7 days! We were concerned also with servicing radar in Avengers and Fireflies, but in October we became HMS NABBINGTON. I recall that sometime in November 1944 we transferred to Liverpool to board the Empress of Canada (26,000 tons) and sailed for Australia via the Panama Canal.

The voyage, unescorted, took 31 days calling at Colon where we were allowed ashore. The Americans had set up a great number of stalls loaded with free food and soft drinks. Unfortunately, nearly 4,000 troops were allowed ashore and in the race to get to the food and drink the stalls were demolished and chaos reigned. Obviously we created a bad impression and we understood that the Americans were never so generous in the future.

We arrived in Sydney sometime before Christmas but my watch was not allowed ashore. Beguiled by the lights of the city and after blacked out Britain I broke ship and went drinking and ice-skating. After a fall on the ice rink I woke up in hospital next to a Chinaman. I was suffering from concussion and stayed in hospital for 3 weeks, subsequently rejoining MONAB I under canvas on RandwicK racecourse. Strangely, I was not penalised for my technical desertion. After a month we transferred to R.A.A.F Nowra where we continued servicing aircraft.

There may have been some construction work going on when we arrived at R.A.A.F Nowra but we were not involved in any sort of that work. We were immediately housed in long wooden buildings that were split into small cabins to accommodate two men. Furniture consisted of, I think, two beds and a table.

Shore leave was allowed every other day when we were taken by lorry into Nowra. It was essential to get there before 6 p.m. as at this time the hotels stopped selling alcohol. I had a girl friend in Nowra, by the name of Norma Dorrington, and her parents were kind enough to invite me to dinner on many occasions. This is where I first enjoyed the delights of pumpkin pie.

During this period I joined a Naval dance band playing alto saxophone. The Navy kindly provided us with a driver and a 3 ton Bedford lorry to enable us to tour the area playing to civilians and troops. We were allowed to take ashore tinned fruit etc. but not cigarettes or tobacco. Luckily a tin of "pussers" tobacco was the same size as a tin of pineapple and so by transferring the label from the fruit to the tobacco everyone was happy. The bell of my saxophone also came in useful for taking small items ashore

Following the bombing of Hiroshima and Nagasaki we became largely redundant. In November 1945 we came under the name of HMS Nabswick and the unit dispersed until I was the only one left. Following the break-up of MONAB I  I was left to my own devices. This was quite inexplicable. I was paid and fed but had no duties. During this time I was in some demand because I had knowledge of a gap in the perimeter fence enabling men to go ashore irrespective of their watch, bypassing the main gate.

I also devised a clothes boiler, which was in popular use. It consisted of a large bucket of water in which was immersed a heating element wrapped around a square of asbestos. The whole contraption was connected to the camp's electricity supply. Most of the time this worked successfully but there were times when the camp was without power, luckily the fault was never traced to my cabin.

In March 1946 I joined 812 squadron, aboard HMS VENGEANCE, spending some time ditching American aircraft north of Australia. Eventually we sailed for Ceylon (Sri Lanka) landing at Trincomalee and setting up a radio section at Katukurunda. In the belief that we were exhausted we were sent to a rest camp at Kandy for a few weeks. We moved down to Colombo to pick up Vengeance and returned to Portsmouth via the Suez Canal. I was discharged in November 1946.