I SPY: Reminiscences of an out-of-the-ordinary
National Service during the Cold War

Memories of training to be a National Service Coder (Special) 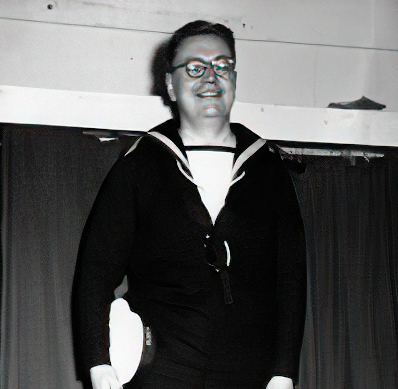 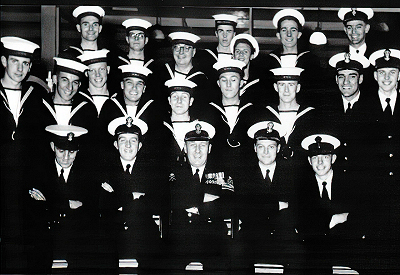 Angus and other Coders at Portsmouth, 1956. Click image to enlarge

I remember well the 3rd of September, 1956. That day I walked through the gates of Royal Naval Barracks, Portsmouth, clutching in my hand a letter instructing me to report to the Commodore. I was about to begin my two years National Service in the Royal Navy. (I must admit at this point that I never to my knowledge saw the Commodore far less met him.) Faced with National Service deferred in order that I might complete my degree at St Andrews University and train as a teacher I had taken out insurance against having to serve in the army by joining the Royal Naval Volunteer Reserve while at St Andrews. This guaranteed that I would be called up to the Navy.

Re-categorised as a Coder (Special)

I was part way through my initial training when a notice appeared inviting volunteers to train as Russian translators. I volunteered. I did not divulge to anyone in authority that I knew that the Joint Services School for Linguists (where those accepted would be sent) was at Crail. I would be able to visit my home in St Andrews, to enjoy home cooking at weekends and often see my girlfriend (now my wife) whom I had met in a class at St Andrews. She lived in Dunblane, not as far from St Andrews as it is from Portsmouth.

I was duly ordered to appear as a Captain's requestman so that I could formally make my request to go on the course. The captain looked at me as if I was something dragged in by the cat. He was obviously old school and believed that the Russians would be defeated at sea by superior ships and gunnery and not by spineless creatures who skulked in comfort far from the sound of battle collecting intelligence. He told me that I would be allowed to take the selection test.

On the afternoon of the test, I reported to the gymnasium which had been fitted out as an exam hall. I was the only candidate in a sailor suit. The other applicants to become translators were in civilian clothes. They had not yet been called up and indeed would not be accepted by the Navy unless they were accepted for the Crail course. They would have to go to one of the other services if they failed to be selected. For the most part they were, unlike me, straight from school. They were going to Oxford and Cambridge colleges which did not allow male students to start their university course until they had completed National Service. The test was a lengthy and demanding one supplied by the National Institute of Industrial Psychology.

A few days later the Captain sent for me and informed me with great disdain that I had passed and would now be re-categorised as a Coder (Special). A couple of weeks later I joined a new intake of Coders (Special), consisting of those who had passed the test. After basic training we were sent to HMS MERCURY near Petersfield in Hampshire to learn about radios, codes etc., and there we signed the Official Secrets Act.

We left Petersfield and arrived at Crail about the middle of November. The former naval aerodrome was a very bleak and exposed place. We were issued with text books, note books and dictionaries and immediately began to study Russian very seriously and intensively, the equivalent of A-Level in seven-and-a-half months. We were very well taught using a course which had been written by the staff of JSSL as the place was known (Joint Services School for Linguists). By the way, this was an army camp - well below naval standards. We attended various types of Russian class almost all day every day except Wednesdays when we had the afternoon for recreation. We also had an hour of P.E. and an hour of other instruction every week.

But let me give an example of typical army behaviour. We were told that the camp was to be inspected by a brass hat from Scottish Command. Everything had to be spick and span before we set off down to the classes that day. That morning a squad of the camp staff set about replacing all the electric bulbs in the billets with bulbs of a higher wattage and of course those that did not work with ones that did. We were delighted to feel that something good and positive was to come out of this inspection. After all we had spent many weeks in ill-lit quarters where it was difficult to read a book or write a letter far less study Russian! Imagine our chagrin when we returned from classes after the inspection was over to find that the quartermaster was supervising the removal of the better bulbs and their replacement with the poor ones so that the better bulbs could be packed away ready for the next annual inspection!

Seven-and-a-half months after we arrived at Crail the final exam was held. A few who passed with very high marks were sent to Cambridge to continue their Russian studies. The rest of us were promoted to Leading Coder (Special) and sent to Pucklechurch for further instruction and practice in listening to groups of Russian numbers being read out like an encrypted message.

Pucklechurch was an RAF establishment near Bristol where Chinese was also taught. The one really silly man on the camp was the lieutenant commander in charge of the naval personnel. Every week there was a test and he obsessively kept comparing the results of the three services and the averages which they achieved in the tests. He demanded that the naval average be higher than that of the Army and the RAF every week. He then all of a sudden came up with an 'Alice in Wonderland' idea. He called us together and said that in future every coder would score above the average for the coders. This was his idea to improve performance even more. He also announced the edict (or perhaps I should say ukase) that every coder who scored below the class average would do extra Russian on Saturday mornings. It will be obvious to readers that because of the way averages work (by average he meant the arithmetic mean for I suspect that had never heard of the mode or the median!), roughly half of us spent half the rest of our Saturdays at Pucklechurch doing extra Russian.

When the course at Pucklechurch ended, we were all sent to Portsmouth for a crash course in radar operation. The British had come up with the great wheeze of forbidding the use of radar in warfare situations but rather listening to the radar signals of the enemy. This would mean that an enemy using radar would be detected when he was still out of radar range. We would hear his transmission while he still could not hear the reflection of his transmission. It was all very hush- hush and we were sent to ships on a big NATO naval exercise in the Arctic Circle. I enjoyed the distinction of reporting the position of a submarine of another country which had merely come near enough to the surface to make two sweeps with its radar aerial and explaining to an officer from the bridge what had enabled me to detect the submarine.

And then came our posting to Germany and our real work - that for which we had been trained! We were stationed at an establishment situated on the outskirts of a small village just outside Kiel. Our work there consisted of listening to endless gunnery exercises being carried out by the Soviet Baltic Fleet. The transmissions to which we listened and which we also recorded were radio telephony (i.e. were voice, not Morse) and were 'in clear' (i.e. virtually no codes were used except perhaps the call signs of the ships). I can still vividly recall the Russian for ‘miss' and 'practice drogue' (a target). Funnily enough, I cannot remember the Russian for 'hit'. I have consulted Russian dictionaries but can find no expression I recognise. Does this mean that my memory is not what it once was or does it tell us something significant about the standards of Soviet gunnery?

I ought to remark here that I no longer believe that anyone was interested in the content of the signals which we intercepted. I am now convinced that all that anyone wanted to know was whether or not the Soviet Baltic Fleet was following its normal routine because, if it deviated from its routine, it might mean that it was headed out through the Kattegat and the Skagerrack into the North Sea. That could have well been the signal that the balloon had gone up - World War Three!

At the beginning of July, I was sent home on leave. My fiancé and I spent a week in London seeing the sights. She then set off for North Wales to join her parents on holiday there and I set off for St Andrews and home. After a longish leave (leave had accrued to me while I was in Germany and those who did National Service in the navy had to do only twenty-three months although we got twenty-four months’ pay!), I had to report at Devonport to be demobbed. We had been instructed to report to the barracks at Devonport (I was a Scotsman and therefore a Devonport rating) wearing uniform and carrying such kit as had to be handed in. Some kit, mainly uniform and Russian textbooks, had to be retained by us because we were all now to be members of the Special Reserve for, if I remember correctly, ten years. I would not be allowed to re-join the Volunteer Reserve.