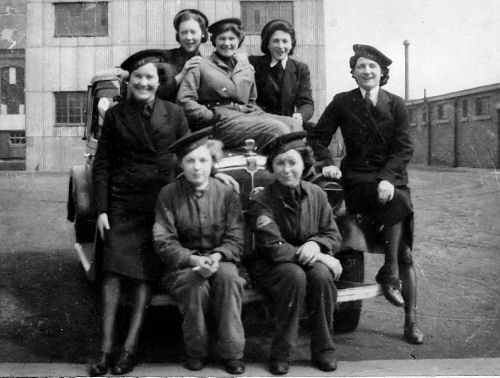 Wrens from HMS CAROLINE, pictured at Pollock dock, Belfast - Peggy is sat on the bumper (right) 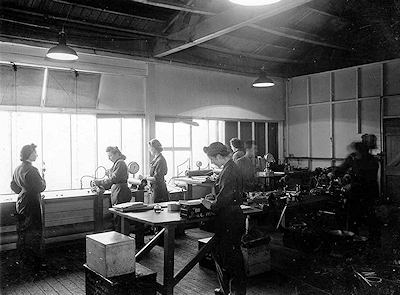 Peggy remembers her time training at HMS VERNON (R) in Brighton attending Seaman Torpedoman course starting in November 1942 and again in the spring of 1944 to undertake the Leading Torpedoman’s course. Once qualified she was darted to HMS CAROLINE, Belfast.

I arrived in Brighton on a freezing night in November 1942 for the Seaman Torpedoman course. All along the front were gun emplacements, I felt so sorry for the soldiers it was so bitterly cold.

The Wrens quarters in 99 Marine Parade were lovely, so bright and cheery; my cabin, which I shared with seven other Wrens, was at the front overlooking the sea. Each morning after a delicious breakfast that the navy cooks made for us, and was served by Stewards, we took the bus to Roedean. After divisions in the quadrangle we went to the classroom for theory. Other mornings we would go to the Dreadnought Garage for Torpedo instructions or St. Dunstan’s for electrical training. The classes were made up of all Women.

Although the course involved a great deal of studying, we also enjoyed a good social life, Dances in the Regent Ballroom, watching Ice Hockey at the rink, but best of all the bar in the basement of the Royal Hotel(?), supervised by Molly, a lovely kind lady who was a friend to us all.

That Christmas we were given beer sent into the quarters by well-wishers but as we Wrens were not beer drinkers, we took it over to the Soldiers still manning the guns on the front, we were so sorry for them spending their Christmas out in the freezing weather. They were delighted with our gift.

One Sunday afternoon in February 1943 I had met up with a Canadian solder (we had first met at the Regent Ballroom). His name was Bruce. He asked me if I would mind going for a walk in the country as he had to take a message to his uncle who was stationed in a Canadian army camp. We were walking along a country lane when we hear the roar of an aircraft coming down towards us. Terrified, we both jumped into the ditch, getting as far out of sight as we could. I think it must have been a German in the aircraft having a good laugh at us before returning to Germany. I never went on another country walk!

I returned to Brighton in the spring of 1944 to undertake the Leading Torpedoman’s course, I married Petty Officer R.N.V.R. Frank Smith who was serving on H.M.S. BLACKWOOD. Brighton had changed; the soldiers were no longer there and there was such activity, we were obviously not privy to the reason at that time. (D-Day preparations) I had to learn how to run a Wrenery, (WRNS Quarters) as part of becoming a Leading WRNS - I had to undertake pastoral duties and drill the Wrens; we had to pass this part of the course before continuing. During this time I was admitted to sickbay in a bungalow near Roedean, my bed was in a glass conservatory; night after night the place shook we could feel the vibrations of our bombing in Europe.

I was now busy on the course at Roedean; on the morning of June 6th we stood around the radio after breakfast to hear the news that we had landed in Europe, at divisions that morning the Captain came onto the steps put his telescope to his eye and said "We have now landed in Europe, at this moment in time our injured troops are being landed in Newhaven, I wish that you all forget your family and friends and put all your effort into winning this war".

I had to go to Eastbourne for part of the course, on the night before I was to return to Brighton the air raid siren sounded, we spent the night in the shelter knowing something different was happening but not what it was, it was only next morning leaving Brighton station that I saw the newspapers headlines "pilot less plane falls on Eastbourne".

This was the start of the infamous doodlebugs. It was 24/7 doodlebugs, we had to get on with life we couldn't spend all our time in the shelter, so some bright spark (after all we were electricians) decided we would take turns to go on watch in pairs on the roof of the Wrenery at night, we were equipped with a whistle and football rattle. The idea being when the tail flame of the doodlebug went out, we would sound the warning to the others by blowing the whistle and rattling the rattle. We all slept soundly knowing we would get this warning. It was many years later when I realized how futile this would have been, we wouldn't have had time to get the whistle to our lips before being blown to smithereens. At this time I spent many evening watching full of admiration the brave Hurricane pilots bringing down the doodlebugs into the sea tipping them with the wings of their planes.

I completed the course, qualifying as a Leading Torpedo Operator specialising in electrics and was presented with my badge unfortunately a Sailors red badge; they had not issued any Wrens Blue badges so I had to embroider over the red with blue silk.

I returned to H.M.S. CAROLINE proudly displaying the badge of a Leading torpedo Operator, working on the Captain Class Frigates (Submarine Chasers).