Memories of flying with the MONAB II test flight at R.N.A.S. Bankstown 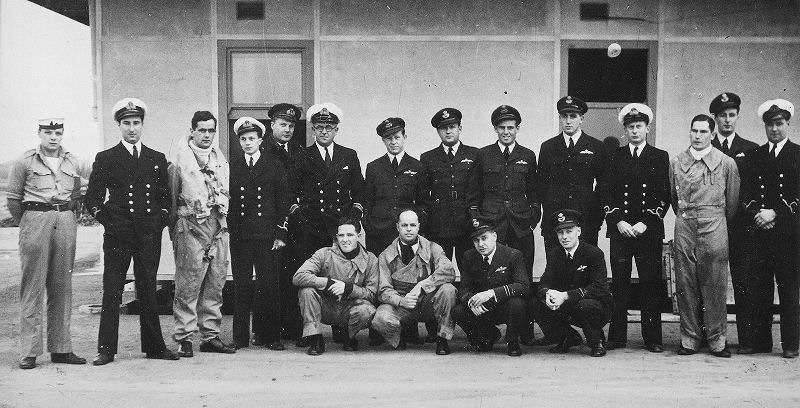 Michael joined the test flight of MONAB II at Royal Naval Air Station Bankstown after a brief spell with 706 Squadron at RNAS Jervis Bay. He became the first RN pilot to fly an Avenger Mk III when they arrived at Bankstown in June 1945. After his spell at Bankstown Michael moved to RNAS Nowra to rejoin 854 Avenger squadron, a unit with which he had previously served

The MONAB with which I was primarily concerned was HMS NABBERLEY situated at Bankstown. I had previously been part of 854 Squadron which at that time was attached to HMS ILLUSTRIOUS, but due to a couple of unfortunate incidents I had managed to accumulate two log book endorsements and two 'Loggings' and it was decided to dispense with my services when ILLUSTRIOUS arrived in Sydney in February ‘45.

I was posted firstly to a temporary camp at Warwick farm racecourse in Sydney, where we were accommodated in tents in the centre of the racecourse, and used the grandstand bar as the wardroom. After several days there I was packed off to the 'bad boys' squadron, 706 at RNAS Jervis Bay, which was under the command of the biggest (and baddest) of them all, Lt. Cdr. Bobby Bradshaw. After two weeks of idleness and still accommodated in tents, the C.O. asked us one day to add up the hours we had flown in Avengers, and since it transpired that I had the greatest number I was posted to Bankstown for test flying duties.

The purpose of RNAS Bankstown was to repair unserviceable or damaged aircraft, and assemble new ones. Once they were deemed serviceable by the engineering section, they were then test flown by members of test flight who pointed out any unserviceabillties still remaining or passed them as being fit to go into front-line service.

The composition of test flight at Bankstown was I believe, quite unique, since it consisted of about one third of its number being Royal Navy pilots and observers with about a couple of TAGs [Telegraphist Air Gunners], and the remaining two thirds were RAAF pilots seconded to the Navy for test flying duties.

Our immediate C.O. was Flight Lieutenant Geoff Schaeffer, he was killed under the most tragic circumstances. His wife had just given birth to their firstborn in Melbourne, and our Cdr. Flying, Lt. Cdr. Roy Dence suggested that Geoff had better take a Seafire down to Melbourne for a fuel consumption check. After spending a day with his wife and new daughter he took off for Sydney and within a few minutes had flown into the Dandenongs, a mountain range to the south east of Melbourne. The Dandenong range would not be more than 2500 ft. at its highest point, yet it seems to attract certain cloud formations and has claimed the lives of many (admittedly Inexperienced) pilots.

The harmony between the two services in test flight was quite outstanding. Many close friendships were formed and one of the RAAF pilots, FIt. .Lt. Ron Rae became one of my firmest friends and remained so until his death in 1986. His youngest daughter is, in fact, my God daughter.

It was understood that the pilots of test flight would have no scheduled days off, and would work every day that weather permitted. When the cloud base fell below around 3000 ft. a decision would be made by Cdr. (Flying) and Geoff Schaeffer as to whether flying would be cancelled for the day and test flight given a day off. When this decision was given in the affirmative test flight would, amidst loud cheers, move into Sydney as a body and do the rounds of the pubs and bars, which seemed to be the obligatory way of enjoying oneself during free time in the services. I found the work in test flight most interesting. I think I was hooked on flying from the moment I went solo in 1942 and was quite happy to fly seven days a week. (Which explains why I decided to make flying my career and flew for the next forty years).

As you might expect, every piece of equipment in the aircraft was checked - radio, guns, hydraulics, engine performance, and handling characteristics. I normally took my observer and air gunner with me on all test flights, even when I was doing stalls with and without flaps, and diving to maximum permissible speed. It was during the last manoeuvre that a couple of incidents occurred that made me change my normal procedure.

If my memory is correct, the maximum permissible diving speed (as per the handbook) was 320 knots. The maximum speed we were obliged to attain during test flight was 310k. However, since I was fully aware that front line squadrons frequently achieved speeds of up to 350k I saw no reason why I should pass an aircraft as being fit for operational service unless I had also flown It to this speed. The first two months passed uneventfully, but one afternoon, just as I was approaching 350k in a dive, part of the skin on the upper surface of the wing started to fold back, creating some minor turbulence. From then on, I took off by myself to do the stalls and dive to maximum speed, after which I landed again to take on my crew to complete the rest of the test schedule.

It was just as well that I did, for on one occasion, just as I was approaching 350k in a dive the aircraft went completely out of control with my body being thrown around the cockpit and the control column belting me in the knees. At first, I thought it was about time I baled out, but then I grabbed the violently oscillating control column and found that I could get the aircraft more or less under control. The elevator control seemed rather sluggish but the other controls were fairly normal so I decided to come in for a landing. This was achieved without too much difficulty and after taxying to the tarmac and getting out of the aircraft I saw only too plainly what had happened. Most of my starboard elevator had broken away during the dive. This incident did not change my determination to push the aircraft up to 350k - the only difference being that I now started the dive from 12000 ft instead of 10000.

The really exciting moment occurred, however, when Cdr (E) came up to me one day and said ~ Price, have you ever flown an Avenger 3? At this time, I had never even heard of an Avenger 3 and was quite excited when he told me that Bankstown had Just taken delivery of a number of them still in packing cases, and that after assembly I would be flying them. For the next two weeks I made an earnest study of the handbook, and finally the great day arrived when the first one was rolled out on to the tarmac.

After a fairly lengthy cockpit check I took off, and was amazed at the improved performance of this later model. Viewed from the outside it did not appear to be much different from the Marks I and 2, apart from the colour scheme which was all over navy blue. However, it had several refinements that the others did not have, including a very good autopilot. Also, its 2000 HP engine gave it a top speed of 25 knots above the earlier Avengers.

It was about this time that I learned that the ILLUSTRIOUS had been withdrawn from the Pacific, as she was well overdue for a re-fit. Consequently, my old squadron, 854, had been disembarked and sent to RNAS Nowra. I also learned that 854 were to be re-equipped with Avenger 3s, and this finally convinced me that, as much as I enjoyed my time with Test Flight It was time to return to squadron life, which, to me, was what being a Fleet Air Arm pilot was all about.

I therefore requested, and received, a transfer back to 854 Squadron in July, where I was received with open arms by the CO, Lt. Cdr Freddie Nottingham, as I was the only person who knew anything about the Avenger 3. So, for the first week I found myself acting as instructor to my old squadron mates, after which we spent the next two months working up as a night intruder squadron to be embarked on the "Formidable" and operate against Japan. Fortunately for us the atom bomb was dropped ten days before we were due to embark. As far as I know, 854 Squadron was the only one to be equipped with the Avenger 3, and in all probability, I was the first person in the RN to fly it.