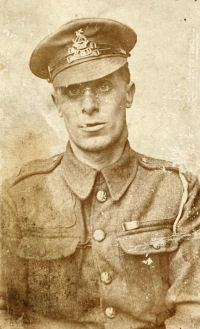 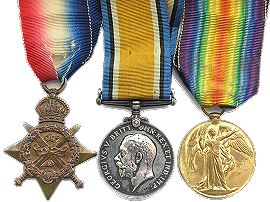 BRITISH WAR MEDAL: This medal was instituted to record the successful conclusion of the First World War.

VICTORY MEDAL: The medal was awarded to all ranks of the fighting forces, to civilians under contract, and others employed with military hospitals who actually served on the establishment of a unit in a theatre of war between 05 August 1914 and 11 November 1918 (inclusive).

Alfred was a serving member of the Sussex Division of the Royal Navy Volunteer Reserve, official number Sussex Z/123. This low serial number suggests he was one of the early recruits; the Sussex Division came into being on April 26th 1904 and had a maximum strength of 110 ratings in 5 companies.

On August 2nd 1914 the RNVR was mobilised and the men of the division were ordered to report and await further orders; two days later the men of the RNVR were informed that only a small percentage of their number would be joining the fleet for service at sea, the rest were to form a new fighting force, the Royal Naval Division (RND), for military service on land. This new fighting force was composed of 12 Battalions in 3 Brigades, 2 RN and 1 RM.

November 4th 1914, Alfred was ordered to report to HMS ’Victory VI’ the RN Division Recruit training depot at Crystal Palace, Sydenham, London to receive basic training. Assigned to 3rd training Battalion. From this date he was a member of the RN Division.

February 4th 1915, left RND Training Depot, drafted to HMS ‘Victory IV’, RN Division Depot at Blandford. Assigned to ‘A’ Company, Collingwood Battalion at Blandford. [This, along with Hawke and Benbow, was a newly reconstituted Battalion,: During the Divisions first operational deployment, the defence of Antwerp in October 1914, a communications failure left three battalions of the 1st Brigade stranded and unable to retreat to the new lines, the men of three Battalions were taken prisoner.]

On February 28th 1915, the RND departed from Blandford Camp to embark for the Dardanelles and the Gallipoli campaign. Benbow, Collingwood and Hawke Battalions would sail later once training was completed. The RND were in action on April 25th 1915, a Beachhead established at Cape Helles on the southern tip of the Gallipoli peninsular.

May 29th 1915, Alfred with Benbow, Collingwood and Hawke Battalions landed at Gallipoli. Collingwood Battalion attached to the 2nd Brigade alongside Anson, Hood & Howe.

June 4th-5th 1915, the 2nd Brigade & the RND were in action, in the 3rd. Battle of Krithia; a third attempt to capture the village of Krithia and its prominent hill feature Achi Baba. This was the first attack of the campaign to take place under trench warfare conditions and it was to fail badly; 60 officers and 1.800 men were casualties, half of these were killed. Collingwood Battalion was to provide troops for a second wave for this attack but were severely mauled by flanking fire when French Singhalese troops were over run on their flank leaving them open to enemy fire.

June 8th 1915, the severity of the casualties suffered in the action of June 4th & 5th saw the RND division contract to have 3 Battalions per Brigade. Collingwood and Benbow Battalions were disbanded and their men being distributed amongst the other three Battalions. Alfred was transferred from Collingwood to Hood Battalion.

September 8th 1915, Alfred is hospitalised – this appears to be a result of illness rather than being wounded. Alfred reported to the 3rd Field Ambulance station with defective teeth, he was passed to No.11 Casualty Clearing Station the same day where it appears he was also suffering from Dyspepsia..

September 18th 1915, Alfred is evacuated from Mudros aboard the Hospital Ship ‘Aquitania’ bound for the UK. On arrival in UK sent on leave.

May 10th 1916, transferred from 3rd Reserve Battalion to the newly formed 2nd Anson Battalion (one of 4 new Battalions planned to bring the Division back to 12 Battalions.)

June 13th 1916, transferred from 2nd Anson Battalion to the 2nd Reserve Battalion, Blandford. The RN Division had been transferred from the Admiralty to the authority of the War Office on 29 April 1916 and was reorganised and redesignated as the 63rd (Royal Naval) Division on 19 July 1916. Khaki uniforms were introduced, from this time but with navy insignia.

The new force still comprised of 3 Brigades, with 4 Battalions but the RN Division was reduced to eight Battalions; four regular army battalions, were added to the division to bring the strength up to 12 battalions- the new line up was:

March 24th 1918, Alfred is reported as ‘Missing’ – in March 1918 the 63rd (Royal Naval) Division was in the Flesquieres Salient to the south west of Cambrai. On the fourth day of the Battle of St. Quentin the RN Division was ordered to withdraw from their positions at Bapaume and make their way to Rocquigny (approx 85 miles SE). There are two possible scenarios during which Alfred may have been captured; during this withdrawal two parties of men from Hood Battalion became disoriented and moved off in the wrong direction, towards Bus, they were not seen again and were assumed to have been taken prisoner by the German forces. The other, and most likely, possibility is that he was wounded and left behind – the withdrawal was made under enemy fire and wounded men could not be recovered. 16 officers and 328 other ranks from Hood Battalion were either killed or wounded on March 24th.

April 20th 1918, Alfred is listed as a Prisoner of War and is held in the Langensalza POW camp in Germany (now called Bad Langensalza), where he recovered from his wound in the camp hospital.

January 15th 1919, after 10 months in captivity Alfred was repatriated with other POWs

1914: Alf, lower centre, his brother George is on the right, posed with a fellow sailor and an instructor shortly after the formation of the Royal Naval Division. 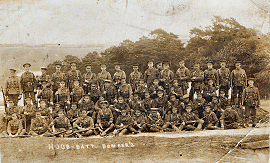