Many thanks to the authors of the books featured on this page for kindly donating a copy of their work to the Royal Navy Research Archive. If you have written a book on any aspect to Royal Navy history, we would be pleased to review it and add it to the archive - please contact the editor for more information.. There are currently 18 books in this section. 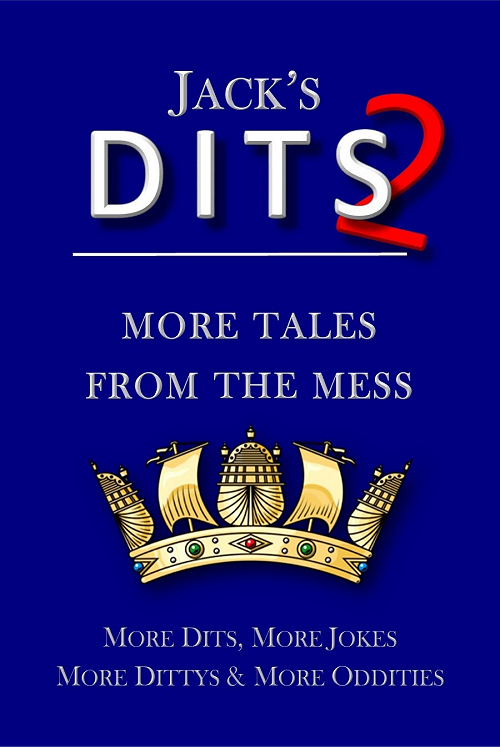 Jack's Dits 2 – More Tales from the Mess, continues spinning humorous yarns, fables, anecdotes, and hilarious jokes interspersed with a further flurry of ditty's, quotes, and oddities that will entertain and amuse, along with some which will evoke fond memories. 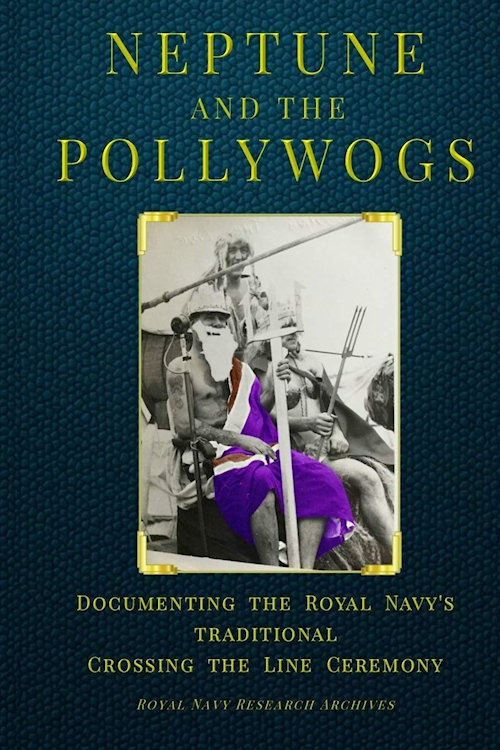 Compiled by author Paul White, the idea for this work was suggested by the editor of the Royal Navy Research Archive. The resulting collaboration has produced a work that tries to explore the origins of this ancient tradition and how its practice in the Royal Navy has evolved over time.

In its early forms, and even up until the early part of the 20th Century the ritual was brutal, the penance owed by initiates (Pollywogs) often resulted in serious injury. The ceremony is classic RN pantomime -all the actors get to dress up and all characters have well worn scripts to follow in what is quite a spectacle during which both officers and rating Pollywogs all receive equal punishment. 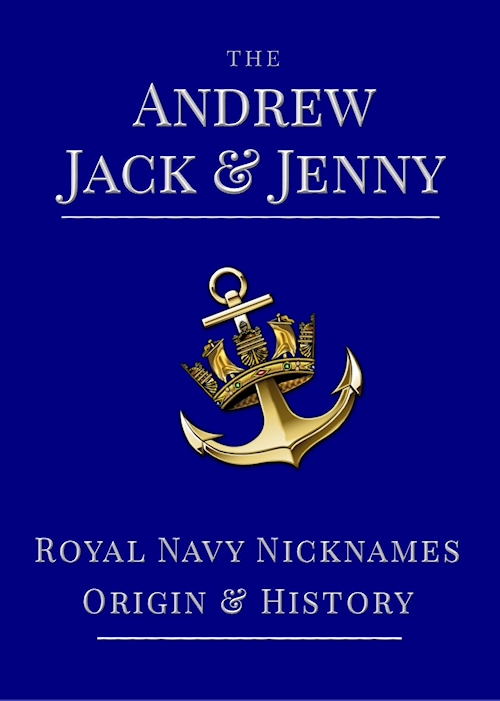 Unlike the civilian nicknames we get labelled with; those our classmates called us at school, the one's various work colleagues may apply to us from time to time, or the ones our siblings find amusing, a military nickname has greater significance, it holds a value only fully comprehended by our contemporaries.

Arguably, the Royal Navy has the most entrenched tradition among the services for bestowing nicknames, names not only for each sailor but for places, equipment and actions. This book, The Andrew, Jack & Jenny, focuses primarily on the names given to each skin and essence the moment they became a matelot.

Royal Naval nicknames are not chosen by the recipient, they are bestowed, irrevocably, by custom and tradition. Yet, each sailor soon becomes attached to their 'new' name, which grows into a large part of their identity, even influencing their character. It soon becomes the name which is spoken with pride in answer to the question "Who are you?" 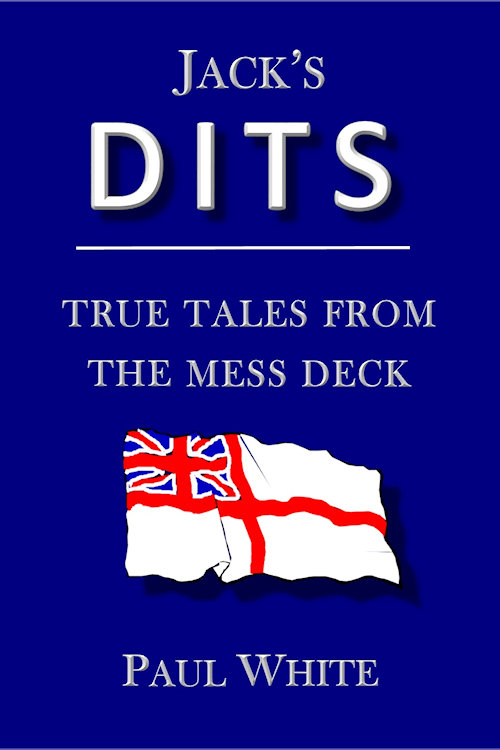 The idea of creating Jack's Dits came about from the many wonderful comments and messages the author received after the publication of 'The Pussers Cook Book', in which included a few Dits and annotations from some of the old hands.

So he was then asked if he could publish a book which would kindle more recollections that old salty sea dogs could reminisce over. So Paul set about collecting and collating as many sea stories as he could. Not wanting the book to be dry and boring, it was decided that a mix of Dits and jokes, along with a ditty or two, would give such a tome a good balance of entertainment, while providing the right stimulus for evoking fond memories.
Paul asked for sailors, past and present, to forward their 'dare do' and 'dare done' stories. Along with this, he recalled many a tale he himself heard in the mess. More narratives, anecdotes and dits were harvested from the internet and social media. It is these, the 'True tales from the Messdeck' which are the stories, once again re-told here, which are fondly known as Jack's Dits. 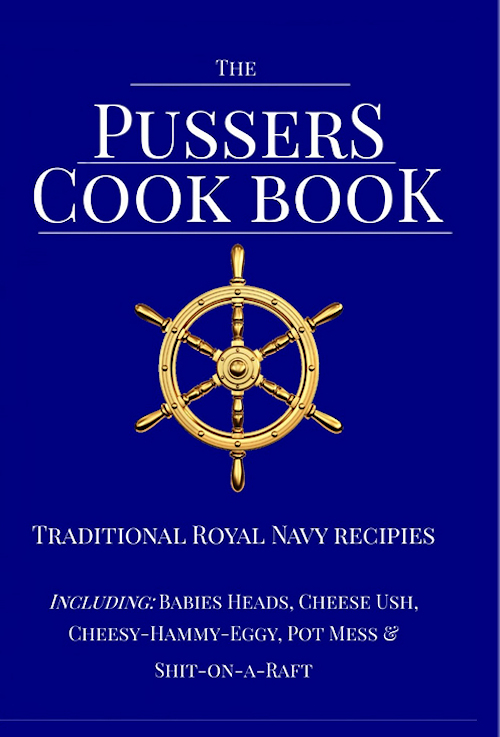 This 90-page book explains 22 recipes covering both food and beverages regularly found on the ships menus during the 1960s 70s &80s. The essential glossary explains the ‘Jack-speak’ (naval slang terms and names) which, often colourfully, describes the food and drink as well as items and practices found in the naval galley.

For authenticity the author has retained the original names, jargon and slang, even though they can be politically incorrect and to some possibly offensive. This work fills a gap in the recording of Royal Naval history, and to have sanitised these recipes and practices would have seriously diminished its value as a reference work.

This book is both serious and comical, with a smattering of colour images and a sprinkling of cartoons it brings to life things that many may remember, such as tucking into an egg banjo, Babies heads, pot mess or Duff, and raise a smile; these much loved dishes and many others are now captured for us to recreate. 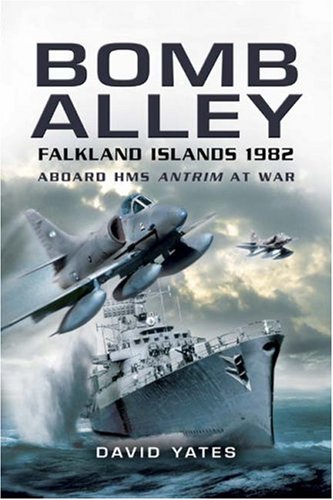 In his book David Yates recalls his experiences in the Royal Navy as a Leading Catering Accountant aboard HMS Antrim despatched to the South Georgia at the start of the Falklands War. David conveys the humour, spirit and traditions of life in the Royal Navy, vividly describing the daily routines of life aboard ship and what matelots expect when in port.

The author successfully conveys to the reader how the normality of his peacetime navy was thrown into turmoil on Friday April 2nd 1982, as Antrim prepared for war. In particular the description of the traditional ‘crossing the line’ ceremony is well described. You can almost taste the pill that is thrust down each initiates throat, and imagine the terror at being roughly, and repeatedly dunked by the ‘bears’.

The book is easy to read and. while well researched, is not top heavy with facts and figures, this semi-autobiographical work makes for fascinating reading offering a peek at life below decks and off duty as well as in the uncertain days that were the Falklands conflict. The book is well illustrated with a 38 images and has two comprehensive glossaries, one of naval terms and a second devoted to terms specific to naval ‘cooks’, a must for those not familiar with the naval catering branches. Warships of the Tyne: 1763 to Date: An illustrated chronological history of warships built on the Tyne
by Frank Burn

This 526-page book provides a record of the warships built on the Tyne over a period of 228 years. From the first Tyne built warship, the Mermaid-class sixth-rate frigate HMS Solebay in 1763, to the last, the Type 23 "Duke"-class frigate HMS Westminster in 1991. Ships as small as a 178 ton Gun Brig up to a massive 27,500 ton Dreadnought, some very famous ships were born on the Tyne, including 14 aircraft carriers.

Each of the 452 vessels built during that time are featured in alphabetical order with basic information for all, and an image provided for the majority. Details given include; Pennant umber, Launch date, Builder, Type, Class, Displacement, Length, Beam, speed, crew compliment, Armament, and significant dates in the ship’s history and her fate.

It was not the author’s intention to give a complete history of each ship, but rather to put each ship in its chronological place in history as an aid for one who wishes to take up further research. 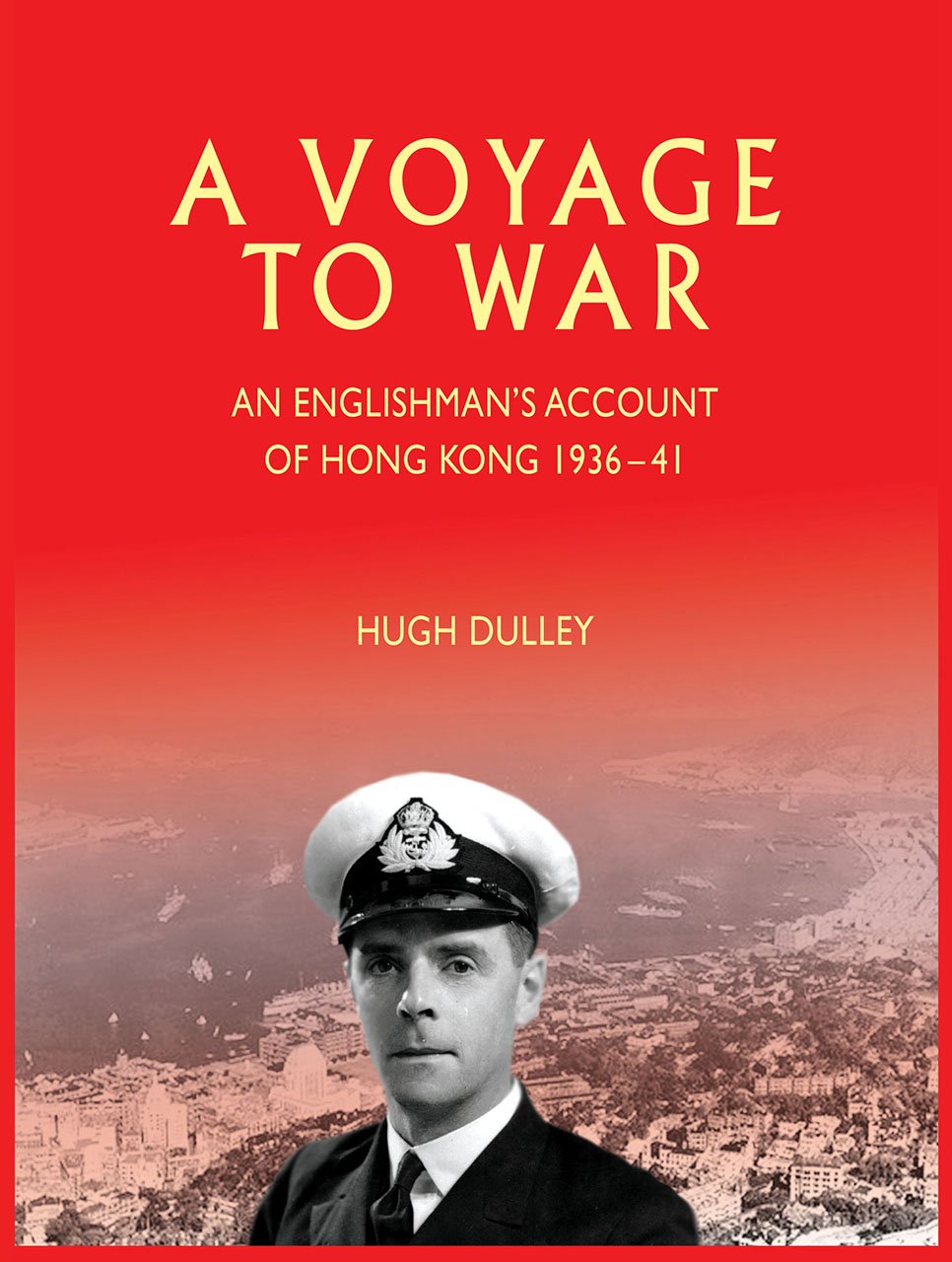 Lieutenant Commander Hugh William MacPherson Dulley, Hong Kong Royal Naval Volunteer Reserve, known to everyone as ‘Peter’ was a member of the small RN contingent who died in the defence of Hong Kong in December 1941.

Peter was a ‘weekend sailor’ called into active service when war broke out, and he was on a steep learning curve in the wartime RNVR, with little experience of naval life and rudimentary seamanship skills he found himself aboard the tug HMPS PERLA operating as a r patrol boat, conducting patrols around the islands; later promoted to Lt Cdr and in command of the rescue tug HMAPV ST. AUBIN in which he undertook a 6,500 mile voyage departing from Hong Kong in May 1941 to deliver her to Aden. He arrived back at Hong Kong in September 1941 and was appointed as First Lieutenant aboard the sloop HMS CORNFLOWER. The Japanese invaded Hong Kong on December 8th 1941, Peter was killed while leading a shore party on the island on the 9th. He was posthumously awarded a mention in despatches for his actions.

This extensively researched and illustrated book has been compiled by his son Hugh using letters written between Peter and his wife Therese, and their friends and family over a period of six years. Beginning with his arrival in the colony in 1930, to take a position with Jardine Matheson & Co. Ltd., it tells their story up until his death in December 1941. 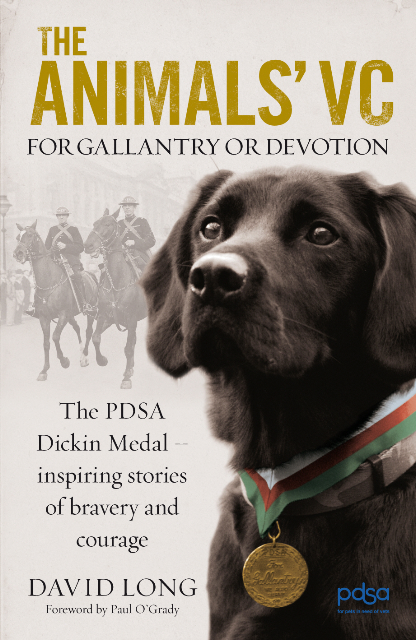 THE ANIMALS' V.C . 'FOR GALLANTRY OR DEVOTION' The PDSA Dickin Medal - Inspiring Stories of Bravery and Courage
by David Long

This book recognises the most extraordinary achievements of animals in war - including pigeons flying through enemy lines, a life-saving cat on a Royal Navy destroyer, and Army dogs sniffing out IEDs in Afghanistan. For these heroic animals The People’s Dispensary for Sick Animals (PDSA) Dickin Medal remains the most prestigious award of its type anywhere in the world, with just 64 awarded in its near 70-year history.

Now for the first time a new history, authorised by the PDSAA, details every one of their remarkable stories. Describing with moving testimony the individuals and their exploits, it explores the remarkable bonds which develop between animals and the men and women they serve alongside and covers the period from the Blitz to the present day.

In so many theatres of battle animals have shown truly indomitable spirit, as well as courage, loyalty and fortitude. Of course there will always be those who question the concept of heroism or gallantry when it is applied to a dog or a cat or a horse or a bird; but more of us find ourselves genuinely moved by the animals’ stories, and perhaps all one can really say to the doubters is this: read their stories, listen to the people who knew them, and then decide. From the Blitz through Ground Zero to Helmand Province, these animals are remarkable, and so too are their stories.

Produced with the full cooperation of the PDSA, and written by established author David Long, a royalty from every sale will go to save sick animals. 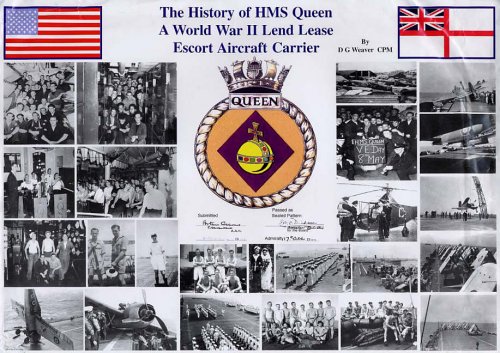 This extraordinary book tells the story of one of the Lend-Lease American built escort aircraft carriers supplied to the Royal Navy during World War Two. A self-published work released in December 2004 this is more than just a book; it is presented as a boxed set of materials about HMS Queen. The Set comprises of a 260 glossy page hard back B4 size landscape format book, a DVD film of 853 Royal Naval Air Squadron operating onboard the ship in early 1945 and a CD-Rom which contains an Adobe Acrobat version of the book. The box also contains a set of large-scale deck-by-deck plans of a Ruler class escort carrier.

In addition to telling the story of the ship, drawing on official documents and the reminiscences of the crew, David delves into the building and modification process which saw HMS Queen, and all but four of her class, transformed from merchant hulls into warships. Unprecedented levels of detail and a wealth of photographs and maps make this a work the definitive account of HMS Queen and her squadrons.

Publisher: David Weaver
ISBN-10: 9889727218
Copies can be purchased directly from Mr. Weaver - please e-mail for details.
Find it on Amazon