It is a little known fact that in November 1945 a handful of Avro Lancaster bombers were transferred from the Air Ministry to the Admiralty. In total six aircraft were transferred, intended to replace the Armstrong Whitley GR. VIIs operated by 734 naval air squadron Engine Handling Unit. 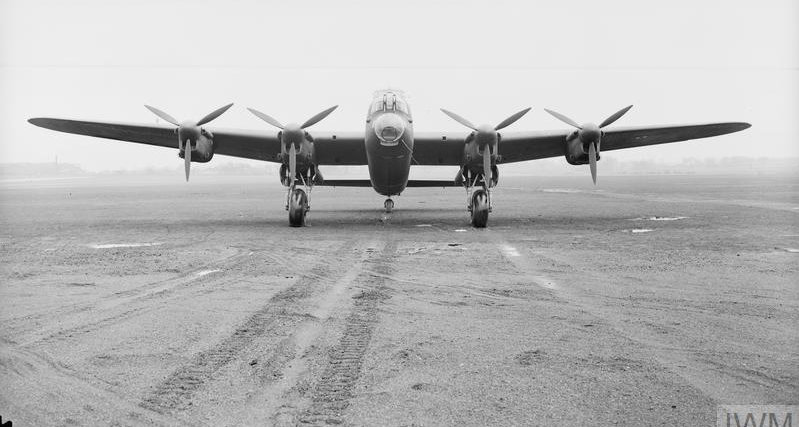 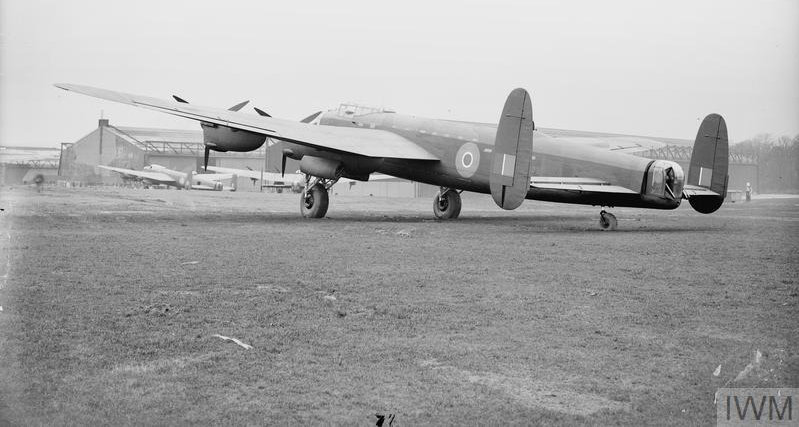 734 was a part of HMS GODWIT, Royal Naval Air Station Hinstock, Shropshire, having moved there from Royal Naval Air Station Worhy Down, Hampshire on August 21st 1945. This unit operated from Hinstock's nearby satellite airfield, Royal Naval Air Station Peplow, (also known as Child's Ercall) a former RAF bomber base where the long runways could accommodate them. As an Engine Handling Unit, its aircraft were specially fitted out as flying â€˜class rooms' with engine and fuel flow monitoring instruments in order to train pilots in the handling of Merlin engines. In addition to its planned re-equipping with Lancasters the squadron was to have been the only Fleet Air Arm unit to receive B17 Flying Fortresses, these plans came to nothing though when the squadron was disbanded on February 21st 1946.

The Lancasters were instead issued to 780 Advanced Flying Training Squadron which was reformed at HMS GODWIT a month later on March 28th 1946. 780 was equipped with an assortment of aircraft types, including Oxfords, Harvards, Fireflies, Tiger Moths & Lancasters. It is not clear when the Lancasters arrived at RNAS Peplow, or where they came from.

Petty Officer Air Fitter (Engines) Ron Swinn was a member of 780 squadron and he was responsible for the maintenance of the unit's first 'Lanc' - Lancaster PA224.

Ron recalls that on his arrival at Peplow he was taken by the Station Engineering Officer to a hangar way out in the `boondocks' where he was introduced to the monster bomber and asked me whether he thought I could cope with an aircraft of this size.

"I was so speechless I could do no more than nod my acceptance whereupon I was told to report to the Engineer Officer in charge, Lt. Marshall (he was relieved later by a Lt. Clarke). There were also a couple of young `Subbies' (Sub Lieutenants) straight from training college."

It was intended that the Lancaster was to be gutted and instrumented to make it into an Observer's flying classroom. This entailed fitting opposing banks of flying and navigating instruments in the space aft of the main beam and fixing half a dozen seats on each side. In this way, a dozen trainees could be taken aloft at the same time.

"My immediate superior was `Tubby' Hayles, a jolly little Geordie, who was to carry out the conversion, leaving me to wrestle with the remainder of the jobs. Bear in mind that this aircraft had been in long term storage for God knows how long. And so, with my three fitters and a rigger, we set about our task while Geordie and the rest tore out the items which were surplus to our requirements."

"My first priority was the power plants - Merlin 55's. After a couple of weeks we had them ready for ground runs. How proud I was as I started them up, one after the other firing up with no difficulty whatsoever. It was a feeling of sheer delight to have these four monsters working away at my command, the aircraft bucking, bouncing and straining at the brakes and chocks. A few adjustments here and there, an occasional tweak on a rod end and we had four sweet running engines absolutely in tune with each other. Another check run, up to full power, everything seemed OK Geordie checked his controls, the PO Wren Radio Mechanic flipped a few knobs and switches, the killick electrician made sure his part of the machine was working and then we chopped all four engines, returned to the office to put some signatures on paper and fixed up a test flight for the following day."

"The next morning arrived with a warm blue sky; it was a perfect day for flying. All the station came out to see if they could cadge a trip but our Canadian pilot played it by the book. This monster had not reached for the sky in a good few years and only necessary crew would make the first flight. I secured the Flight Engineer's long side-facing seat, the PO Wren occupied the radio office and Geordie and the Engineer Officer were in the observer's pew and the upper turret (guns removed, of course)."

"A perfect start up accompanied by a smirk of pride from yours truly. We went through the check list item by item; everything was perfect. Each Merlin gave its own personal performance to the watching crowd. A quiet `AOK' from the pilot to his motley crew, a chocks away wave of the hand and we were taxying off to the peri track. We did a thorough brake test as we wove up to the end of the field, a full throttle check again on each engine to clear away any fouling which might have occurred during taxying, a green from the controller and we were rolling. Slowly at first, eyes glued to the mass of gauges; some flickering, some steady, others crawling up to the required levels. The rear of the aircraft left terra firma, all nice and level for a short while and then that upward surge as we became airborne. This old tried and trusted bomber once destined for return to the pots and pans, from which it first emerged, had returned proudly to the environment she had been designed for."

"The flight test over and completed to the full satisfaction of all, we taxied back to our hangar for more work and more tests. We made longer trips. Once, I recall, to the Mediterranean â€" Malta, with the station C.O., doctor, padre and a couple of Wren officers. I believe a tot of `duty free' came back on that trip. I missed out, however, as I was doing my CPO board down at Lee-on-Solent."

"One morning, during a daily inspection II noticed a pool of fuel being fed by a drip from the trailing edge of the mainplane. I deduced that the tank between number 1 and number 2 engines was leaking and, on removal of the inspection panels, found this to be correct. My crew positioned the aircraft at the end of the hangar, jacked up the wing, trestled the tip in accordance with the maintenance manual and proceeded to start drilling off the stressed panel necessary for the removal of the tank which was about the size of a normal dining table. They removed the tank and I then took my crew and the appropriate tools to nearby RAF Cosford for the purpose of scrounging a replacement tank."

" Young Flight Lieutenant Engineer Officer, with whom I was dealing, was billeted in a mobile van at the far end of the dispersal where scores of brand new Lancasters were parked. One of these had been allocated to me to rob for spares."

The manufacturers were still fulfilling their War contracts by delivering the planes to Cosford with just flight testing hours on the engines and airframes. These were being scrapped on site, the engines removed by acetylene torches and the parts burnt in the station fire pit to train the fire crews.

" I removed my replacement tank and we proceeded back to Hinstock. Next morning, I drove down to the hangar, opened the small access door next to the offices at which point I should have been confronted by the Lancaster's access door. I was not. However, further examination revealed that the aircraft was there - but a good forty feet from its original position. ."

" With my heart in my boots, I climbed inside; opening the window leading to the mainplane and viewed the damage caused by the unsupported wing. I tore out of the aircraft and burst into the Engineer Officer's office like a madman. There I encountered the two `Subbies' enjoying a mug of tea. I doubt if they had ever experienced the `joy' of being confronted by an enraged Petty Officer. They falteringly confessed to having moved the aircraft so that they could bring in a visiting aircraft but, hurriedly, assured me that they had left the Lancaster trestled up as they had found it. Never have I seen two more crestfallen officers as I showed them the horrendous damage they had caused. ."

Extracts from a letter to the editor from Mr. Ron Swinn during 1984 detailing his memories of Peplow and the RN Lancasters

Lancasters known to have been at Peplow

MK.I - PA224 ex 115 Sqdn RAF, transferred to the RN Deposit Account 29 November 1945 & allocated 780 Sqdn, date of arrival not known. This aircraft appears to have been already at Peplow in long term storage, being collected from a hanger on the unused half of the station, and manhandled to one of 780's hangers for flight preparation & conversion in August 1946,. First test flown in September. Little serious use appears to have been made of the a/c, a long range flight to Malta does appear to have been undertaken later in the year. A/c damaged during ground handling in hanger, after this and no further use appears to have been made after repairs were affected. Ferrying requested 17 December 1946 for return to RAF when station was run down prior to closure. S.O.C.18 April 1947

* No record of transfer or loan to FAA, nor use by 780 Sqdn, but appear on the list of 780's initial equipment dated March 1946, and all except RF229 appear on the Sqdn a/c disposal list as being requested for ferrying on 17 December 1946. It may be that this a/c was present at Peplow in long term storage by an RAF Maintenance Unit {Possibly RAF Cosford}.