Shipwrecked in the South China Sea

The loss of HMS AIRE

By Tony Drury and Tony Elliott

Tony Elliott remembers well the incident that left him and 84 other crew men stranded and off course in severe weather conditions and little hope of rescue. This is the story of the loss of the River Class Frigate HMS AIRE, K262, in December 1946.

The job sounded simple, sail from Hong Kong to Singapore; HMS AIRE was being paid off after her last tour of duty as the Nominal Depot Ship to HMS TAMAR, the naval base in Hong Kong. She had arrived in the colony for the purpose in March 1946 and was renamed 'TAMAR' on March 14th and moored alongside in the dockyard, acting as an accommodation ship for the base which was still being constructed.

When the new shore accommodations were opened in November 1946 her role as a depot ship was over, on November 20th she reverted to 'AIRE' and was earmarked for disposal, being ordered to proceed to Singapore to pay off. A steaming crew was assembled and she departed on her final voyage the following month.

"I was part of a scratch crew who joined the ship to sail it to Singapore, many of us were from the 110th ML flotilla which had been paid off and turned over to the Hong Kong police. Approximately the 19th Dec 1946 we sailed from Hong Kong for Singapore, there were Typhoon warnings and the seas were extremely rough. I was on the middle watch in the radio room on the 20th, during this watch received messages about two ships foundering one I believe was an ocean going tug. I went off watch at 4 am and turned in to my hammock in the foc'¢sle mess. "

While still in the South China Sea the 1,400-ton ship was caught up in a typhoon; the heavy seas and wind driven tides took her some 30 miles off her planned course and into dangerous waters.

"At approx 05:30 there was a loud bang and a scraping noise; we all jumped out of our hammocks heading for the upper deck. I arrived up the ladder outside the radio room, and remember the PO Tel ordering me into the radio room to send out an SOS with position report. It turns out our transmitters were not working so no one in RN HQS Hon Kong was aware of our situation. The Captain cleared lower deck and informed us of our situation, we then said a prayer and sang Eternal Father. "

In the early hours of December 20th the ship had been driven aground on Bombay Reef, a treacherous atoll at the south-easterly end of the Paracel Islands in the South China Sea, and stuck fast. The impact caused the generators to go off line plunging the ship into darkness and the ship began to take on water in several compartments, including the engine room. Damage control parties did what they could but without power this was not much. Having lain alongside at Hong Kong for several months much of her equipment, including her radios, had not been properly maintained, it was soon discovered that all of the ship's life belts were in a perished condition.

"At this time a fire started in the engine room and as we had no power we had to fight it manually, I believe the engine room staff were trying to find a way to release the oil from the ship. Also the loss of power meant food had to be prepare in some other way than in the galley. There was a large copper placed on the after deck, how it was heated I am not sure but everything went in including the turkeys which were on board. " 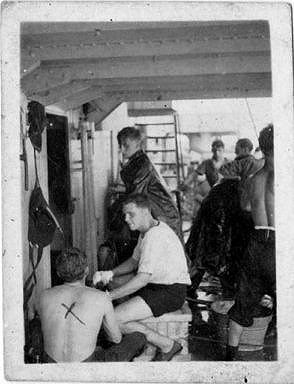 Manning the bucket chain - C/Jx 581464 Telegraphist Tony Elliott marked with an X and others on the stricken AIRE.

HMS AIRE had struck the reef on a high tide, by day light this had receded leaving her high and dry on the coral. She was found to be holed in seven compartments and her port propeller shaft brackets had embedded themselves in the reef. The engine room fire was the result of fuel and oil which had escaped into the bilges igniting. To fight the fire a chain of buckets, mess tins and pans was organised and it was to be two days before the blaze was out.

By the 23rd it it was clear that there was little hope of rescue, they were 30 miles off the nearest shipping lane, with no radio and very little food or water on board; even the rum ration exhausted. Lookouts had been watching the horizon for days and several false sightings had raised hopes of rescue only to have them dashed when no ship appeared. But on the afternoon of the 23rd they were found. At about 1620 the heavy transport ship HMS BONAVENTURE spotted them; the BONAVENTURE herself had been blown off course by the tail end of the typhoon so this encounter was by pure chance.

When the BONAVENTURE attempted to contact the vessel her lookouts had reported using radio and signal lamp she received no response - AIRE's radio was out of action and she was not carrying signal gear, and no signal rating was in the steaming party. When they failed to reply the BONAVENTURE decided to close the contact to investigate. Once it was realised they had stumbled across the stricken HMS AIRE she stood off the reef and plans to affect a rescue were begun.

"On the evening of the 23rd the Bonaventure was sighted; when they took stock of our situation it was realised that it was not possible to launch any boats or attempt to evacuate the ship from the starboard side due to heavy swells hitting the ship. Arrangements were made the next day for them to find a gap in the reef and enter with a heavy cutter, they were unable to get close to the ship on the seaward side be cause of heavy surf. They were also unable to get close on the reef side because of lots of coral. A grass line was floated in from the cutter and we left the ship one by one with whatever you could carry on your back, this was Christmas Eve. Probably the strangest one I ever spent during my time in the RN"

The weather was still rough when the BONAVENTURE arrived and it was decided to wait until the following morning to attempt the rescue, the stranded crew having to face another night of crashing waves and the AIRE rolling and rocking on the coral. On the morning of Christmas Eve after surveying the entire reef a small channel through the reef was found, just passable by a motor cutter and a first attempt to reach the AIRE was made. One of BONAVENTURE's 32 ft cutters was launched but after clearing the passage into the lagoon could not get near the ship. One at a time the AIRE's crew had to make their way over the ship's side onto the coral and wade out to the cutter at the edge of the reef where the calmer waters allowed her helmsman to keep station while the survivors were embarked. The first trip loaded 51 men and the ship's dog. The remainder of the crew left the ship in the second run. After marking the channel and placing a buoy BONAVENTURE set course for Singapore. There were no serious casualties and all 85 crew were put ashore in Singapore. 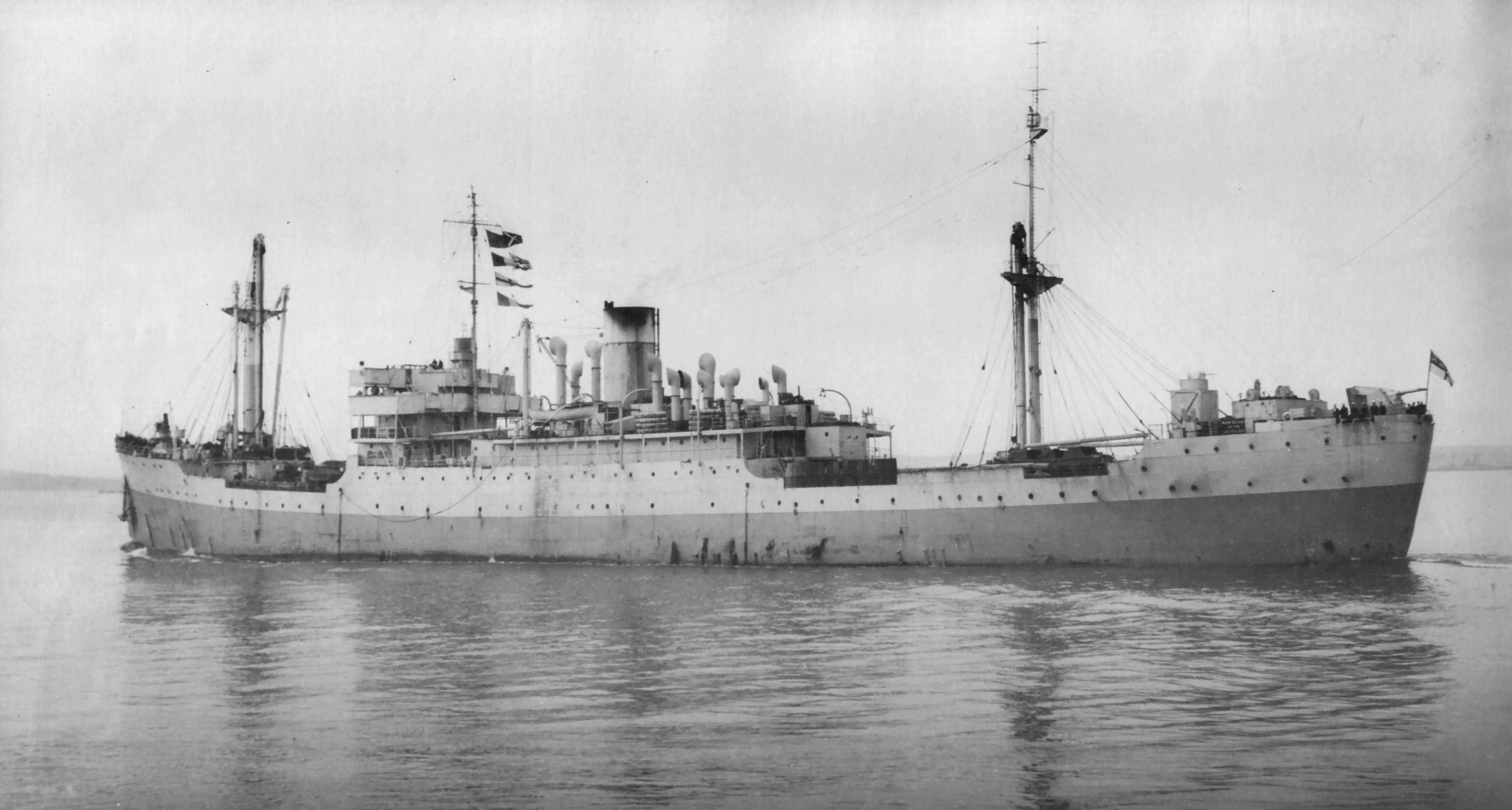 "I was serving on HMS ALERT in October 1951 on our way from Singapore to Hong Kong we sailed close to the Bombay reef and the hulk of the AIRE was still there I only wish I had got a photograph. "

This was not the only time that HMS ALERT had visited the reef; she was tasked with boarding the AIRE in April 1947 in order to salvage documents etc. They were too late however, as local fishermen or Chinese pirates had already stripped the ship, their Junks with less draught, could operate in the Reef.

My experiences as a boy-entrant at HMS ST. George in 1943 - recollections of a a Boy Telegraphist