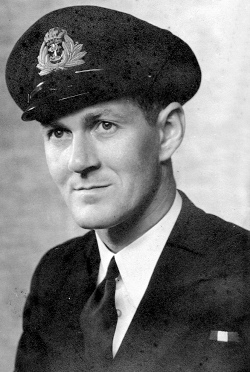 As an experienced yacht skipper Patrick signed up for the recently formed Royal Naval Volunteer (Supplementary) Reserve (R.N.V.(S).R. ) on May 29 1937. This was a force of 2,000 yachtsmen and other experienced amateur sailors over the age of 25 and retired professional seamen established in 1936 as a ready reserve of suitable men to become naval officers in times of emergency. As he lived in Hove at this time he was attached to the Sussex Division of the RNVR for his reserve training.

On the outbreak of World War Two the RNV(S)R was called up for active serve, the initial batch of 140 men reported to the RNVR officers' training establishment, HMS King Alfred at Hove Marina in late September 1939. Patrick was ordered to report for training on January 3 1940 and was commissioned as a probationary, temporary Sub-Lieutenant RNVR. The majority of the RNV(S)R were mature, experienced sailors who were fast tracked through HMS King Alfred and some had a stay of only 10 days before they were commissions were approved.

On completion of his short induction into life as an RN officer Patrick was assigned to the armed boarding vessel H.M.S. AQUAMARINE from January 23rd (Lt N P McLeod RNR in command). The AQUAMARINE was a trawler pressed into service by the Admiralty as an armed boarding vessel operating under the control of H.M.S. PYRAMUS, H.Q. Northern Patrol group at Kirkwall, Orkney Is.

Patrick was to stay with his first ship for a year, being promoted to temp. Lt. RNVR on January 5th 1941. This Promotion brought a new appointment to the anti-submarine warfare trawler H.M.S. LORD AUSTIN on February 1st 1941 (Temp. Lt G Butchers RNVR in command). The LORD AUSTIN was under the control of H.M.S. FORTITUDE. at Ardrossan, North Ayrshire, part of the Rosyth Command (West), Clyde Sub Command. This was to be a short appointment however as Patrick was ordered to join the flower class corvette H.M.S. MALLOW ((K 81) Lt. Cdr W B Piggott RNR in command), as her First Lieutenant on April 9th.

MALLOW was a convoy escort vessel attached to the 8th Escort Group based in Londonderry, Northern Ireland, under the control of the Depot ship H.M.S. SANDHURST. She operated mainly in the Northern Atlantic, covering convoys between Halifax, Nova Scotia and Liverpool via Iceland. Lt. Cother was awarded the Distinguished Service Cross on March 24th 1942 for his skill and enterprise in actions against enemy submarines while serving in H.M.S. Mallow. One such action took place on October 19th 1941 when the German submarine U-204 was sunk near Tangier, in position 35º46'N, 06º02'W. HMS MALLOW and the sloop HMS ROCHESTER carried out a by depth charge attack on the submarine.

Patrick left MALLOW in February 1942, briefly serving in her sister ship H.M.S. JONQUIL (K 68 - Lt. Cdr R.E.H. Partington in command) before joining H.M.S. NASTURTIUM (K 107 - Lt. C.D. Smith, DSC in command) on March 18th 1942. He was to move again on October 17th 1942 when he joined the corvette H.M.S. AUBRETIA (K 96 - Lt.Cdr. V.F. Smith, DSO in command) as her First Lieutenant. AUBRETIA like her sister flower class vessels was tasked with convoy protection duties, operating with the 3rd Escort Group out of Greenock.

Patrick spent the next ten months on the AUBRETIA before beginning a period of rest and recuperation leave on April 12th 1943 before journeying to RN base Lerwick in the Shetland Islands, H.M.S. FOX, to join for general duties on July 27th. Patrick was to spend the remainder of the war at Lerwick, leaving there shortly before the base was closed in September 1945. His last five months in the RN were served at H.M.S. VICTORY, RN base, Portsmouth before he was released from service on January 27th 1946.

He served as Captain of actor Errol Flynn's yacht Zaca.1956-57