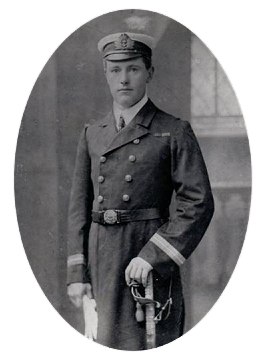 His Naval career began in July 1896 when he was 18 years old. After receiving a Public-school education, he reported for duty as an assistant clerk (Midshipman) at MS VIVID, RN Barracks, Devonport. After basic instruction and kit issues, he joined the Cruiser HMS St. GEORGE in September for further basic instruction. At the end of November 1896, he was appointed to the Cruiser HMS PHILOMEL, part of the Cape of Good Hope Station.

HMS PHILOMEL was deployed in January 1897 to assist in the troubles in Benin (Now Nigeria) and one thing which always stood out in his mind was the horror of watching matelots returning to the ship with precious looted artefacts, priceless vases, carpets and other valuables, many being damaged or broken on the way. During his time onboard PHILOMEL, he was promoted to the rank of Clerk (Paymaster Sub-Lieutenant) on July 16th 1897.

His next appointment was short one, his record of service notes that he was attached to two Cruisers, HM Ships VENUS and CAMBRIAN from November 9th 1897 until January 12th 1898 {possibly these vessels were in refit at Portsmouth Naval Dockyard}. He joined the new Battleship, HMS CAESAR which commissioned at Portsmouth on January 13th 1889 for service with the Channel Squadron in home waters. On October 4th 1899 Edward was promoted to the rank of Assistant Paymaster (Paymaster Lieutenant).

He left HMS CAESAR one year later on January 17th 1900, and took up hiss next appointment, the Coast Guard Cruiser HMS MELAMPUS at Kingstown, County Dublin, Ireland, on March 22nd 1900. This was also a short appointment; he was appointed to the Cruiser HMS HERMIONE on the China Station in August of that year. .

At the time of his arrival in China the Boxer rebellion was still ongoing, HERMIONE possibly one of the 8 British warships that took part in Eight-Nation expedition to relive the siege of diplomatic legations in Peking on August 14th 1900. Edward recalls sailing up the Yangtze River during the 4th Boxer Rebellion.) He recalls that a Midshipman Max Horton, joined the ship in the spring of 1901, he would rise to thje rank of Admiral C. in C. of the Western Approaches during WW2

HMS HERMIONE was paid off on August 14th 1901 and Edward was appointed to the Cruiser HMS IPHIGENIA refitting at Portsmouth on September 17th 1901. He left the ship on March 10th 1902 and took up his next appointment, the Battleship HMS SANS PAREIL on April 17th; she was part of the Home Squadron based at Portland.

He next joined the new Battleship HMS ALBEMARLE at Chatham Naval Dockyard on her commissioning day, November 12th 1903; this ship saw service with the Mediterranean Fleet In August 1904 while the ship was docked for “coaling up” in Lagos, Nigeria he was asked by the District Commissioner of Southern Nigeria to assist as paymaster to the troops serving there; he left the ALBEMARLE on detached duty, receiving a promotion to Acting Paymaster (Paymaster Lieutenant Commander) in November. Later he was seconded by the Navy to the Colonial Office and subsequently acted as Deputy Commissioner but sadly his time in Nigeria was cut short by a severe attack of malaria which meant his returning to U.K. He was Medically retired with rank of Assistant Paymaster (Paymaster Lieutenant) and placed on the Retired Officers List on May 9th 1905.

With the outbreak of World War One Edward was called out of retirement on October 31st 1915 and is recorded as being bourne on the books of HMS VISTORY, R.N. Barracks Portsmouth, but returned to the retired list on March 12th 1916; no appointments are listed for this period.

He was again called out of retirement on August 29th 1917 with the rank of acting Staff Paymaster (Paymaster Lieutenant Commander) initially attached to HMS VISTORY, transferring to books of HMS PRESIDENT (RN Accounting base, London) on September 21st. On October 30th he took a short leave before assuming the position of acting Paymaster (Paymaster Lieutenant Commander) on the Cruiser HMS CONSTANCE on November 17th 1917. This ship was part of the 4th Light Cruiser Squadron o (HMS CALLIOPE, CONSTANCE, COMUS, ROYALIST AND CAROLINE) of the Grand Fleet based at Scapa Flow. She had taken part in the defeat of German navy at the Battle of Jutland on May 3st1-1June 1st 1916 but little time at sea before the Armistice was signed. CONSTANCE was in Scapa Flow to witness the surrender of the High Seas Fleet at Scapa Flow on November 26th and 27th 1918.

In March 1919 CONSTANCE was assigned to the 8th Light Cruiser Squadron and dispatched to the North America and West Indies Station, arriving at Bermuda March 22nd, carrying the flag of Vice Admiral Morgan Swinger. Edward left her on December 20th 1918 to return to the U.K.

His next appointment was to the Cruiser HMS DONEGAL in reserve at Devonport on February 1st 1919; this was another short appointment, he left the ship on March 6th to travel to Scapa Flow to join HMS CYCLOPS a Repair ship which recommissioned on April 1st 1819 for White Sea duty at Archangel, Northern Russia. CYCLOPS arrived at Chatham Naval Dockyard in late October; Acting Paymaster Lieutenant Commander Hopkins left the ship soon after and returned to retired list on December 29th 1919.

Having finally left the navy he took charge of a small private school in Portsmouth cramming boys in mathematics and Greek in readiness for Public school entrance. He died in 1947.

Notes This is an updated account of the Naval Service of Edward Nathaniel Hopkins which now includes details of his appointments from his service record. Some material from the original version of this peace have been left out of this revision because they cannot be verified or are historically inaccurate.

… In 1917 the ship (CONSTANCE) was sent to Archangel in Russia to assist with the evacuation of the Tsar and his entourage. Some of the entourage had already joined the ship when the family was assassinated and plans had to be changed… Following the February Revolution in 1917, the Romanov family and their loyal servants had been imprisoned in the Alexander Palace in Petrograd (now Saint Petersburg) from March 1917; On August 1st they were moved to Tobolsk, Siberia. They were next moved to a house in Yekaterinburg, near the Ural Mountains. They were killed in July 1918. Edward did not join the ship until November 1917.

…Appalling weather caused the ship to be frozen in and they were unable to sail for some time. Sadly, during that period his malaria returned and he was once again very sick as there was no suitable medication on board... It is believed this last paragraph refers to the White Sae Repair ship CYCLOPS (see photo of officer standing on the ice with CYCLOPS in the background).

…It was decided on his return that he was no longer fit for seagoing duty and he was promoted to Lieut. Commander and became a King’s messenger carrying documents from Portsmouth to Scapa Flow and other Naval stations. This was a post which meant he travelled by train in a locked 1st class carriage with a brief case padlocked to his wrist carrying dispatches… There may be confusion here – it is more likely that he was appointed an aide-de-camp (ADC) to the King, King’s messengers are a separate corp of specially trained personnel, not a positron to which a military officer can appointed. It is unclear from his service history sheet (National Archives Ref: ADM-196-171-148) when this position would nave been taken up; His last duty period in the UK, prior to returning to the retired list, was October thorough December 1919. 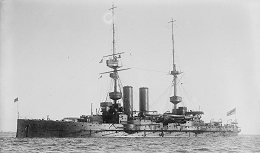 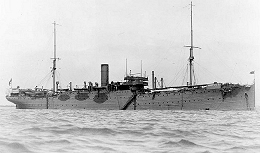 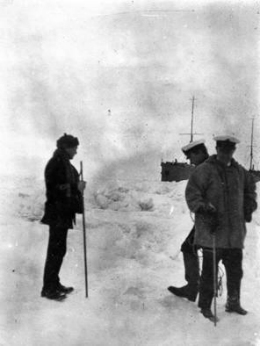