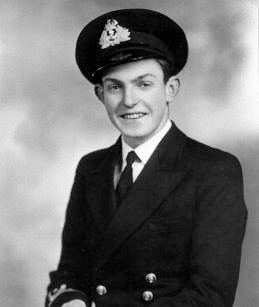 Died 08 April 2001 in Swanley, Kent, England aged 76. His ashes were dropped from a Swordfish of the Royal Navy Historic Flight into the Solent on 10 June 2001

William Clarke, who was known as 'Tony' or 'Nobby', joined the Royal Navy Volunteer Reserve as a direct entry for service in the Air Branch. Selected for training as a Pilot he joined the Air Branch training establishment HMS ST. VINCENT in Gosport, Hampshire on June 29th 1942 shortly after celebrating his 18th birthday.

As a Naval Airman 2nd Class he spent the next two months in pre-flight training at HMS ST. VINCENT, attended lectures and completing courses in subjects such as air navigation, theory of flight, aircraft recognition, etc. On completing this first stage of training he, and his fellow officer cadets were issued with flying clothing, promoted to Leading Naval Airman and allocated to an Elementary Flying Training School for stage 2. He arrived at no. 14 EFTS at RAF Elmdon, Birmingham, on September 23rd, made his first flight in a Tiger Moth the following day and soloed on his tenth flight on October 4th. On completing stage 2 he was awarded his naval wings as a Rating Pilot. The third and final stage of his journey to becoming a naval aviator took him to No.31 Service Flying Training School (SFTS) at Kingston, Ontario, Canada, part of the British Commonwealth Air Training Plan.

He reported for instruction at 31 SFTS on December 30th 1942 to begin the final stage of pilot training; this was to last 16 weeks. Flying was carried out in two-seater North American Harvard trainer aircraft for navigation exercises, instrument & blind flying, night flying, patrol techniques, formation flying and other skills in use by the Fleet Air Arm. Pupils had to achieve a minimum of 100 hours flying time, half to be solo flights. On the ground training included classes in seamanship, navigation, armament, signals, aircraft recognition, ship recognition, aero engines, and aerodynamics, and Link trainer practice. Having successfully completed flying training he returned to the UK arriving at R.N.A.S. Lee-on-Solent in late April 1943 and attended an Admiralty Board that approved his commission as an RNVR officer, appointing him as a temporary Midshipman (A) RNVR (P) on May 25th 1943.

After attending a two week course at RN College Greenwich, 'Tony was sent to Scotland to learn the skills of a fighter pilot at No. 9 (Pilot) Advanced Flying Unit RAF Errol, Perthshire., making his first flight in a high performance single seat fighter, a Hurricane, on July 13th. From Errol he was sent to R.N.A.S. Yeovilton for 18 weeks training with No.759 squadron, part of No.1 Naval Fighter School, being introduced to the Supermarine Spitfire on July 26th. During this course 'Tony made his first deck landing on the training carrier HMS ARGUS on October 25th; to qualify he

had to complete 6 landings. On leaving No.1 Naval Fighter School he was appointed to 794 Naval Air Firing Unit, part of No. 2 Naval Fighter School, RNAS Henstridge, Somerset on November 22nd to complete an air gunnery course, before moving on to join his first operational squadron No. 792 Air Target Unit, at RNAS St. Merryn, Cornwall on January 24th 1944. Here he was checked out on Miles Martinet Target Tugs and spent the next few months towing drogue targets for live firing exercises.

Tony's next appointment on March 8th 1944, was to a front-line unit, No. 879 single seat fighter squadron,. The squadron was equipped with 20 Seafire L.IICs with a strength of 27 pilots; the squadron was assigned to the escort carrier HMS. ATTACKER; they had been ashore at RNAS Burscough in Lancashire since February while the ship was under repair. Tony made his first flight with 879 on March 11th and flew out to HMS ATTACKER to complete three deck landings on the 20th. After a short spell of flying practice the squadron disembarked to RAF Long Kesh a week later to do Army co-operation exercises before re-embarking on April 30th. On May 14th ATTACKER, in company with HUNTER & STALKER sailed for passage to rejoin the forces in the Mediterranean. ATTACKER put into Gibraltar on May 24th, and Tony and several other pilots took their machines ashore to operate from RNAS North Front until June 5th. The squadron was to be split between the ship and various airfields engaged on Army co-operation flying with units in North Africa and Italy; Tony and his section operated ashore in Italy from strips at Pomigliano, June 22nd - 25th, Capodichino, June 22nd - 26th, Orvieto, June 25th - July 19th and Castiglione, July 5th - 18th. The full squadron was back aboard ATTACKER on July 23rd, when the ship withdrew and sailed to Malta. Tony had flown 38 sorties between leaving Gibraltar and arriving at Malta, flying in Seafire L.IIC & L.III and Spitfire Vs and suffered one deck landing incident when NM932 bounced on landing on the ship on July 24th causing the starboard undercarriage leg to collapse.

HMS ATTACKER and 879 next took part in Operation DRAGOON, the invasion of Sothern France from August 15th as part of Carrier Force TF88.1 with sister CVEs EMPEROR, KHEDIVE, PURSUER and SEARCHER. During this operation Tony flew a total of 7 sorties, 4 tactical reconnaissance (TacR), 1 photo recon, and 2 dive bombing sorties. He suffered a serious crash landing back on ATTACKER on the 21st flying in LR710, the aircraft bounced over all the arrestor wires and cleared all the barriers to continue on into the forward deck park and damaged three other Seafires. HMS ATTACKER returned to Alexandria on September 2nd to store ship, Tony spent time flying both from the ship and ashore at RNAS Dekhelia. The ship was back at by the 14th for Operation OUTING I in the Aegean sea, joining the CVEs EMPEROR, KHEDIVE, PURSUER, and SEARCHER to harass and delay German troop movements in the Dodecanese Islands, (Leros, Kos, Samos, Rhodes and Levitha). 879 flew armed reconnaissance sorties from the 16th, and ground attack missions on enemy transport, including dive-bombed shipping in Rhodes harbour on he 19th. Returning from a Force Cover sortie on the 19th Tony suffered another barrier crash after a hard three point landing caused his aircraft, Seafire LR704, to bounce, the tail wheel fell off and the aircraft continued on into the barrier. In the second phase of operations, OUTING II Seafires from 879 strafed the W/T station on Levitha on October 3rd and Tactical Reconnaissance flights and bombardment spotting for the cruiser ROYALIST. The force returned to Alexandria for a further replenishment of aircraft and stores on October 5th; this was Tony's last operation with 879, he conducted 2 TacR flights one over Rhodes on the 2nd and over Crete on the 44th. ATTACKER returned to Alexandria on the 5th, Tony made his last flight with the squadron on the October 10th. He was to return home to the UK aboard ATTACKER, reaching Plymouth on November 10th, to take up a new appointment.

After some leave Tony joined No.772 squadron, a Fleet Requirements School at RNAS Ayr on December 22nd 1944. Here he was to fly a variety of different aircraft types, Firefly, Hurricane, Martinet, and Swordfish initially, but by April 1945 he was flying the high performance Corsair and the Wildcat from September From February to the start of September 1945 he was part of a long standing detachment operating out of RAF Andreas before moving to RNAS Ropnaldsway, Isle of Mann for two months and finally the squadron moved in November to RNAS Burscough were he had first joined 879 squadron. Tony made his last flight in the Fleet Air Arm on April 3rd 1946, carrying out a 30 minute aerobatic display in a Seafire over RNAS Burscough. 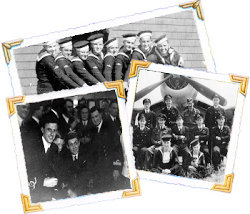